Merri Solars began as a Sustainability Street programme in inner-suburban Melbourne. In late 2007, following a series of water audits and a group purchase of water tanks, a decision was made to make a group purchase of grid connected PV systems. This was when the Federal Government was offering an $8,000 rebate, to anyone who installed a system greater than 1kW, with no means test! 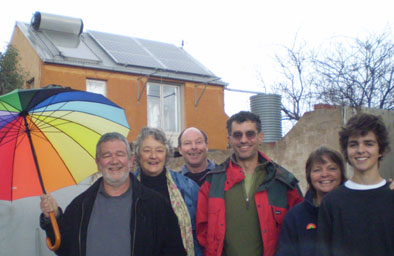 The group sought quality and reliability over price and, in keeping with acting locally, a local supplier. 13 of the original 21 interested households committed to installing grid-connected PV systems.

The supplier held discussions with each householder about the suitability of installing a PV system and the preferred location of the panels, inverter and wiring. All the inspections were completed within a few days but some householders were unable to attend and nominated neighbours or family to negotiate with the inspection team. This caused a few problems with location and framing when the installations began. These were resolved later, but attendance at the inspection is highly recommended.

The matter of RECs had been raised during the negotiations, but a clear understanding of the implications of selling your RECs (see ReNew 105) is important. All households decided to sell their RECs, assisted by the supplier, and were happy to receive a substantial cash payment while awaiting their government rebate. Some now regret the decision.

One of the main difficulties the group encountered at the pre-installation stage was adequate communication about process and timelines between the government, the supplier, and the group.

Installations occurred over 3 weeks in May/June 2008 but there were complications with co-ordinating energy distributors and meter changeovers so that not all systems were fully connected until mid-July 2008. 10 of the group of 13 agreed to collect data from their inverters in order to compare the performance of what were very similar systems:

Apart from the number of panels in each system, the main point of difference was the tilt angle of the panels (15 - 42 degrees). There was vigorous discussion about whether it was better to be optimised for summer (shallow angle) or winter (steep angle). Half the systems needed frames; the other half followed the roof pitch angle. A comparison of performance over 12 months would allow the group to see if tilt angle was a significant factor.

In winter, when it was nearly dark by 5:00pm, there were difficulties collecting data because the inverters sometimes shut down by the time people came home from work and had not turned on when they left the next morning.

Graph 1 (below) shows output of these PV systems over 5 years and the extent to which all the systems were dancing to the same tune in spite of the variations in tilt angle and system size. Tilt angle is not a significant performance factor. There is a difference of only 9.19% (20kWh) between the highest and lowest output. However, the highest overall output came from the system with panels tilted at Melbourne's latitude (37.5 degrees). The lowest came from the system with the NW orientation. As expected, the output from the shallow tilt angles raced ahead of the steeper tilts in summer and then fell back in winter. While shading events and even bird poo reduced output, location was (curiously) a factor in that the 3 highest outputs were next door to each other and yet had quite different tilt angles. 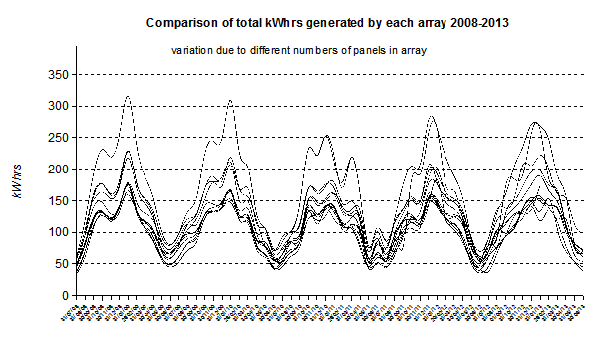 There are 20 different points of comparison. The data provides an insight into what actually happens when similar systems are compared. As expected, output was highest in late January and lowest in mid June. However, there is a noticeable departure from the expected bell-shaped day length curve. Real world factors that have impacted on the efficiency of the systems include: 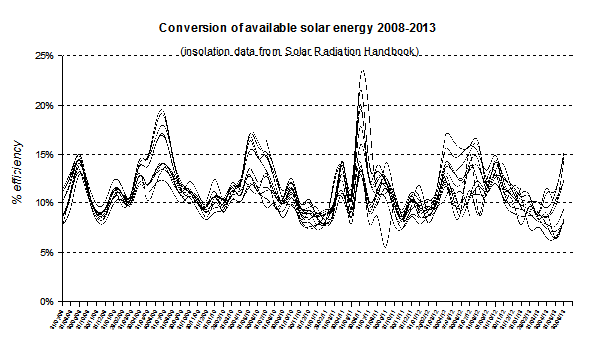 After 12 months householders reported that their electricity usage had not changed significantly although many households spawned an 'electricity nazi' who does the turning-off of unused lights and appliances. Members of the group were confused about the impact of patterns of use on feed-in tariffs with uncertainty about whether to use large appliances (washing machines etc) during the day or at night. Most households reported dissatisfaction with the format, content and veracity of their energy retailer's power bills.

Perhaps it was inevitable and predictable there would be more interest from the group in government energy policy, rebates, and feed-in tariffs. Overall, the group has not only become more energy conscious but also more politicised.

Example of generation plotted against usage

The graph (above) shows the difference between total kWh generated and net kWh generated. It also shows a steady decline in overall consumption. However, this may change over the next few months as winter demand steps up.

Most of the consumption data comes from Country Energy who read the meter. Country Energy explains the data as follows : While net metering is in place the energy produced can first be consumed in your home. The excess (if any) is what is returned to the grid, and purchased by Country Energy. The data we provide you is only what goes in or out of the grid. What you generate and use in the home is not monitored by us.

The solar system has become your primary electricity source, and the grid secondary. It is best if you monitor (as you have been) the generation vs export to understand the total consumption in the home. These equations will assist: